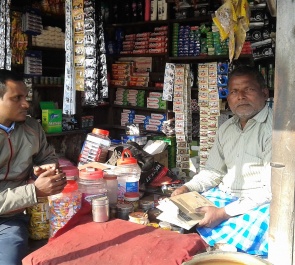 “CRS helped me to change my behavior and I’m supporting CRS to change behavior of my community people.” Chandraeswor Chaudhary

Over the last 21 years, Chandreswor Chaudhary, the owner of a ‘paan pasal’ (betel shop) in Chandrapur, Rautahat, has been working relentlessly to change people’s behavior regarding FP, HIV and STIs. During the initial years of his business, he was hesitant to stock condoms in his shop, as he was ashamed of being labeled as a ‘sex promoter’ and ruining reputation among the community. However, in 1997 he attended the Non-Traditional Outlet Training organized by Nepal CRS Company, where he learnt about safe sex and how condoms can help with FP, and also prevent HIV/AIDS/STIs. This training was an eye opener for him, and since then he is not hesitant to discuss these matters with his friends and families.

He has been selling condoms marketed by CRS for almost two decades now, and along with selling these products, he also disseminates information regarding FP, preventing of HIV and STIs to all his consumers who are mostly above 25 years of age. Today, he is a role model, and often attends CRS organized trainings to talk about his experience and encourage participants to take initiative and educate their consumers regarding FP and safe sex.

“The sales of condoms have increased over the past years, which indicates that behavior change is happening and I believe this is because of CRS’ different awareness programs and easy availability of subsidized products”, shares the proud change maker. In Nepalese society, where taboos still exist with regard to discussing FP, safe sex, Mr. Chaudhary stands out as an example of someone who has made conscious efforts to break down these existing norms and change the perception about FP amongst his community.